Packaged and Edited by The Little Rebellion

Rosalind “Roz” Zarr’s family encouraged her to pursue her love of art from a young age.  Zarr has carried that support with her throughout her life from New Paltz to now in Tucson, Arizona. A SUNY New Paltz alumna, Zarr attended the university from August 1966 to January 1971 This time was a prolific time for growth of art education within the community. Zarr’s a master of jewelry, putting a unique spin on an old craft. Finding herself far from her roots, the friendly and nostalgic Zarr reminisced about her time at SUNY New Paltz and how it influenced her perception of art. Zarr’s jewelry is the only of its medium featured in the Golden Age of New Paltz exhibit.

Were you interested in art from a young age? 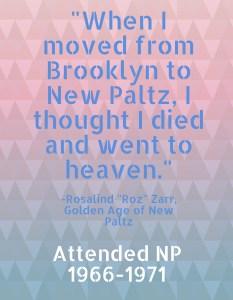 For as long as I can remember. I always loved to draw and my mother, who was a portrait artist, encouraged me to express myself. Growing up in New York City, I took full advantage of my access to some of the finest museums and art galleries.

Whether it be jewelry or any other art, what is your main inspiration while creating art?

My inspiration is to create something unique that will intrigue others.

How did your time as a student at New Paltz affect your art career?

As an art student, I was able to learn studio techniques in various art forms, to study the great works of art throughout history and have an ongoing exchange of ideas with other artists.

How was the transition from New York (Brooklyn and New Paltz) to New Mexico?

When I moved from Brooklyn to New Paltz, I thought I died and went to heaven. Taos, New Mexico was a western version of New Paltz where the transition was easy and the weather was better.

What made your time at New Paltz so special?

It was exciting for me to be away from home, on my own, doing what I loved most and meeting people from all over. I’m sure this is true for most college students. The art majors were a tightly knit group and the feedback and critiques were always valuable. I was lucky to be chosen for a tour of New York’s trending artists which was a rare opportunity. New Paltz, at the time, had a huge budget for entertainment. I think it was something students paid into and we had some of the best free concerts, in the gym, and outdoors at the Tripping Fields.

Did any of your professors influence your art career?

All of my professors influenced me. Dale Stein, who taught design, was perhaps the most influential. Bob Schuler, Ben Wigfall, Harry Hurwitz—check out the amazing film called “The Projectionist,” filmed locally by him—and Dan McCormack, who taught filmmaking, were all memorable and instrumental in my development as an artist.

The quality of our art professors, the enthusiasm of my fellow art students and the general freedom to experiment in all art forms were all significant. Those years were politically significant, but aren’t they all?  The college started a BFA program. A good number of students became politically active during the Vietnam War and the Kent State shootings. There were protests and demonstrations. Many students joined Students for a Democratic Society (SDS). Professors became involved as well.  On a lighter note, a few hours were added when men could visit women in the dorms and regulations were loosened up a bit during my time in New Paltz.

Mon Dec 10 , 2018
Written by Kenny Wood Edited and packaged by Meg Tohill Students in Professor Lindsay Lennon’s Feature Writing class were assigned interviews with SUNY New Paltz alumni who were featured in Wired Gallery’s “Golden Age of New Paltz” exhibition. Here’s what they found: Jack Murphy offers a snapshot of what it […]