Edited and Packaged by Gillian Hamilton

On a sweltering Sunday morning in Saint Augustine, Florida, Michael Velkovich sits in front of his computer, checking emails and paying bills, with his daughter’s two dogs nestled at his feet. Surrounding him is his life’s work: various paintings, prints and other artistic ventures accumulated over a decades-long career. This German-born, New York City raised artist transferred from Syracuse University to SUNY New Paltz in 1970, where he first met local art curator Jack Murphy. Velkovich is an educator, world traveler and proud New Paltz alum who is delighted to display his work in this year’s Golden Age of New Paltz art exhibit.

What do you enjoy most about art?
In general, I think it’s about seeing something new. Wherever I go I first seek out the museums, galleries, art centers or outdoor artwork. It’s remarkable to make a connection with the person behind the art as well. I find it stimulating when I find connections to other artists, either in their subject matter or in the experiences documented through the piece.”

With experience on numerous artistic mediums, what drew you to printmaking first?
It was early in my art student days at Syracuse. I found it difficult to paint because it was so… cerebral. But once I took printmaking I had an excellent instructor and found the combination of physical and cerebral aspects of art I had searched for. I also admired nice prints and wanted to make my own. It was a combination of the handwork, thoughtfulness and the goal to create an image that was as good as the prints I admired that intrigued me.”

You have many accolades, but how have you dealt with criticism from peers, critics or nosy journalists like myself?
I went to a convention a couple years ago in Jacksonville, sponsored by the state [of Florida]. They attempted to bring out your inner feelings so that you become more aware of who you are and how you are viewed by others. I’ll tell ya, three other people cried during the seminar. Some of the exercises were quite upsetting. It was quite offensive and puzzling to me.

So how do you overcome it?
With humor. I have a few favorite sayings, like: “I’m not always right, but I’m never wrong.” But I guess just swallow it and don’t take yourself too seriously.

As a recent graduate you established your first studio apartment in Highland. How was your first introduction to being a professional artist?
I found this abandoned gas station from the 1950s or 1960s, along highway 19 in Highland. It was built in the side of a hill and there were two levels: a street level and a top floor. The lower level had garage bays in it which were a perfect space for a studio. I tracked down the owner who let me live there for free if I did yard work for him. It didn’t have many accommodations, but having that studio is very important to establish yourself professionally. It’s just like being a dentist or an architect; you just need a location that becomes part of your identity.

How has your time as an art educator affected your views of art?
Oh yes, very much. My first school was a neighborhood elementary school and it was wonderful. I admired the way the children created images and the themes within their work. It stuck with me in the long term and inspired me quite a bit on how to improve my own creativity. In hindsight, it was something that improved me as a person and as an artist. 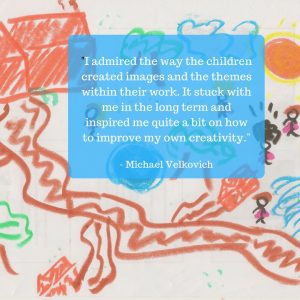 What would be your best advice to an art student hoping to pursue a professional career after graduation?
Don’t be reluctant to change your mind. When I worked with kids, people would ask them what they wanted to be when they grew up. It’s very important to know what to say, but not necessarily to be what you say. You need to have something that you’re aspiring to be and can tell people about when they ask. Older professionals want to support and mentor younger artists, but they need to know what to do with them. If a young person is indecisive, or unable to articulate what they want to do, then it’s hard to help.