Edited and packaged by The Little Rebellion 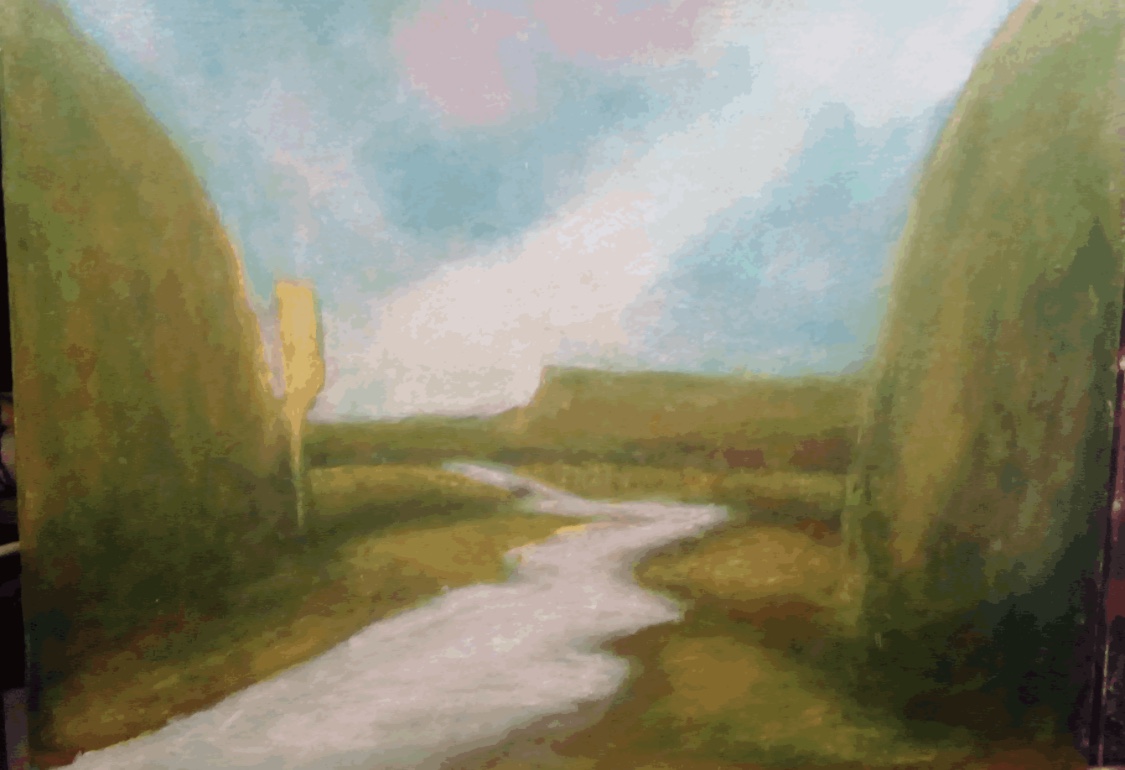 If you happen to be walking around Taos, New Mexico, you may come across a talented bass player who goes by the name of Larry Audette. He occasionally performs with a variety of jazz artists in the area. Audette is a former resident of New Paltz, New York, where he lived during the “Golden Age” in the 1960s. Eventually, his journey took him to New Mexico where he has lived for over 30 years. If you only knew Audette by his musical talents, you’d be surprised to find out that he also been painting for most of his life. He has painted a variety of landscapes throughout the years.

I had a rather rough childhood. My father died when I was 5 years old. My mother then married a man who abused me in ways that would be considered criminal these days. My salvation was learning guitar at age nine and starting to study art seriously around the same time. I’ve managed to practice the guitar pretty much every day for the last 61 years. Along the way, I picked up a few other instruments, specifically the string bass which I now play most of my gigs on.

What did you enjoy the most about living in New Paltz during the “Golden Age” of the 1960s?

Well, the standard joke is, “If you can remember the 1960s, you weren’t really there.” Suffice to say, I participated to the fullest possible extent. I may not remember everything, but the memories I do have are among the sweetest and most potent. The friendships that were forged there in the thick of the psychedelic era were, and are, irreplaceable and remarkably durable. We were like a family of artists. We still are.

After living in New York, why move to Taos?

I like to say that it’s because Taos is as far from upstate New York as you can get and still be in the United States, but that isn’t true. I love the Hudson Valley. I visited Taos during the 1960s and 1970s to visit my friend Bill Gersh. In 1979, I met Pam, my wife, and she became pregnant shortly after. I suppose you could call it fate. It has been great spending the last 38 years in this vibrant art colony surrounded by spectacular scenery.

How did you become a musician?

By the time I got to New Paltz in 1966, I had been playing gigs for four years. It really was a golden era for bands. Those of us lucky enough to be on the scene at the time got a musical education at the bar. I think every bar had live music. We worked six, seven nights a week. Bill Troiani and I had a duet called Duke & Slick which was a lot of fun. We used to work a lot with Mikhail Horowitz and the late Frank Patricolo, who had a comedy act called Null & Void. To say we had a wonderful time is an understatement.

I noticed that you are not only a jazz musician, but also a painter. How did that happen?

The art scene was just as happening as the music. I’d been painting and drawing all along, but in New Paltz there was a fascinating lineup of talented people. I’m not going to list them all here. But, just look at the list of exhibitors at these three Golden Age exhibits in New Paltz! Again, the family feeling was there. Just hanging with this gang was inspirational.

What is the inspiration behind your landscape paintings?

After trying all sorts of modes, I settled on landscape as a motif for painting. Being in Taos, with the humbling presence of the land here, certainly had something to do with it. I also feel the landscape is a pure expression. I actually do the occasional figure and an abstract here and there, but the landscapes just keep coming.

You performed at Taos Historic Museums Fandango fundraiser, what was that like?

It was inspirational!  There were a couple of things written on the studio wall that caught my attention. Some of them were: “A work is only art in the measure that it gives the truth, translated into emotions aroused in the soul of the artist. It has been truly said that there is no work that shows so thoroughly the state of mind of the worker as painting.” And, “Students are taught to paint what they see, and very often the pupil with the least imagination will excel in the craft and win prizes.”  What’s more fun for a musician/painter than to play a gig in a room full of paintings and painters?