Aletta Vett is an accomplished costume designer who has defied rules and created her own life, borne out of the experiences she had at New Paltz. Her passion led her to work on documentaries and teaching future artists.

Aletta Vett was raised in Huntington Station, New York. She enjoys sculpting, drawing and painting, but now is a professional costume designer. It was her passion for art that led her to New Paltz in the 1960s. It wasn’t long after her arrival that she met her husband of 57 years, John Vett, who was a musician. The two instantly fell madly in love. They have two children, now men with children of their own. In fact, one of their sons is named Ilya, after Vett’s beloved SUNY New Paltz art professor, Ilya Bolotowsky. Together, they lived through and experienced the time known as “the Golden Age of New Paltz” during the 1960s.

What brought you to SUNY New Paltz?

I came to New Paltz in 1959. SUNY New Paltz was one of the few state schools that had an art program. The faculty was young and enthusiastic. They were talented, and they taught to supplement their art endeavors, which is what most artists do. My drawing teacher, Mr. Bolotowsky, had retrospective events at the Guggenheim. When we came together it was like magic. Each [student] in their own right went on to become a professional artist. They made their living as artists, and that’s pretty amazing when you think about it.

What was it like at SUNY New Paltz at the time?

The art community itself was extremely tiny. Within the school community, the art students were considered to be “hippies.” We would run around with paint splattered clothes. We were like our own fraternity or sorority, and we would hang and do artwork together. When you have a group like we had, one person would spark the other ones. There was an incredible exchange of information, talent and technique. We had startling discussions about politics and the world in general, but mostly about art. It was very special and, for me, exciting. Because our group within the school was so small, we all knew each other, and believe it or not, 50 to 60 years later, we’re all still friends.

How was it different for you as a female college student?

When I was going to school it was a very different time for women. Young women could aspire to be a legal secretary, teacher or nurse. If you went to your guidance counselor and asked to be an archeologist, the answer was, “Women don’t do that.” As a freshman, I had a curfew. If you disregarded the rules you’d be “campused,” which meant you had to be in by 7:30 p.m. every night. The boys, on the other hand, didn’t have curfews. There was also a dress code on campus for dinner. As a woman, you had to wear a skirt while boys could wear pants. I would rail against the rules—I was campused a lot.

Was your family supportive of your area of study?

Simply? No. My home life as a child growing up was anything but idyllic.

What made you transition to costume design?

My work has gone to a different place. I design and build costumes for theatre. It’s a very strange job, but that’s what I do. From the time I was a very small kid, I would make elaborate costumes and include all of my siblings. I’ve always been fascinated by the history of dress. I took an elective class at SUNY New Paltz called summer theatre. I knew how to sew, so one day I went to the costume shop because they were having trouble, and I never left. It was like this Pandora’s Box that just opened up. I began to volunteer when they were doing shows. After I graduated from school I was asked by the local theatre community, 90 Miles off of Broadway, to help out.  Eventually, I became a shop manager after I retired from my regular teaching job.

What did you teach?

I was an art teacher, for the most part. I taught everything from elementary to high school. I loved to teach. I also worked for the Department of Corrections at a maximum security prison, Greenhaven, where I taught art for 15 years. I worked at SUNY New Paltz for 10 years in the costume shop and taught classes. As of now, I’ve worked for SUNY Ulster for 11 years. I also work at Shadowland [in Ellenville, New York]. There, the actors are professional. It’s a very interesting place to work because it’s one of the few professional theatres in the Hudson Valley. But of all of the jobs that I have done in my life, the best job is being a grandma.

How many shows do you think you’ve done?

I don’t even know how to measure that. I’ve done hundreds of shows, and have done each one multiple times. 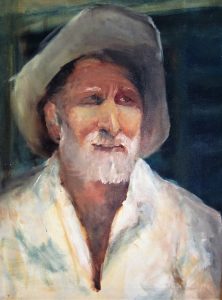 What does the Golden Age of New Paltz mean to you?

It was a time when we as artists explored our own art because we didn’t have any boundaries. There were no conventions, rules or regulations. The school was just starting and the stars were aligned. It was about how we all came together and were able to connect. It was an unbelievable time. It had to do with our faculty; they supported us. Still, when we have a show and the professors come in, it’s like we’re back in their classes. It’s a special feeling that was formed when we were very young and just starting out and it has continued. It was a golden age because it was a time of great exploration. I valued their friendship then, and I value their friendship now. The artwork was exciting, and it still is. Us old farts are still doing it!

2 thoughts on “After Thousands of Shows, Costume Designer and Alumna Aletta Vett Expresses Herself through Art”