Students in Professor Lisa Phillips’ Literature of Journalism class were assigned to immerse themselves in the unfamiliar. Here’s what they found:

Maeve Allen watches puppets perform during a rehearsal of Avenue Q, where the theater department students express themselves through their characters.

Connie Rotunda danced her way to the center of the classroom. The students settled on the blue mats and turned to their teacher, obedient backs straight. A stillness swept over the room. “Movement is understanding yourself three-dimensionally,” she began. Reading from a Tibetan parable, Professor Rotunda asked the students to be aware of their three centers, to feel the body as if it were a horse-drawn carriage with the horses pulling at their muscles.

The young actors are learning about transitional movements with Rotunda as they begin their career in the SUNY New Paltz Department of Theater Arts Movement is one of the foundations of acting; it’s all about how you present yourself on stage. Theater majors must work on all components of acting, singing and choreography to perfect the competitive craft.

“Wave to Maeve over there,” she said. I smiled sheepishly, hoping my presence wasn’t distracting the students from their work.

But the SUNY New Paltz students continued to toss and turn, reaching and pulling their bodies on the mats. Professor Rotunda coaxed each movement into the next, admiring the students’ forms and curves. She wanted the students to see beyond the physical aspect of the class. “You are coming into the work on your own,” she said. “Emotions are knotted in our chest. Movement unravels them for our ideal center. We let the emotions play up and down the spine like a beautiful violin.”

Connie requires the students to keep weekly journals about their experience in her movement class. Later, after the tumbling had ceased and the students rehydrated, Professor Rotunda asked about these experiences.

Britania, a girl whose long hair had cascaded at my feet on the mats moments before, volunteered.

“I realized that instead of working to get a grade, I am doing this for my own self fulfillment,” she said.

“I feel much more open,” another girl shared. “It was a weird morning, but now I feel open and good.”

The objective of the Movement Work class, along with other foundational theater classes, is that the students create a sense of self awareness for the young actors. “With acting, you’re being somebody who is not you,” said Matt Moment, a first year theater major. “Therefore you have to adopt, using movement, using your voice, these skills that you hone in class, to tell that truth the best possible. The different classes are just different nuances of a performance that all work towards the same goal of telling the story.” 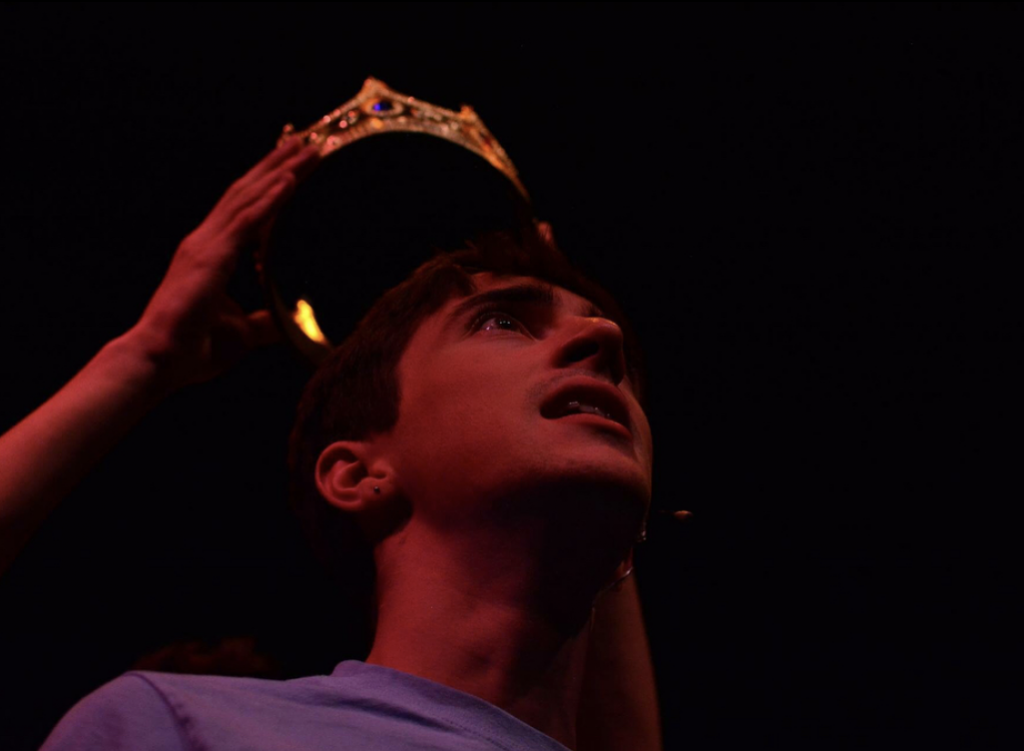 Professor Rotunda hopes to teach her students the Feldenkrais method of awareness through movement to illuminate them into their own way of working. “There’s no right or wrong,” Professor Rotunda says. “It’s each individual’s own exploration and discovery. They need to be open to the process, to each moment. I want my students to open up and out of habits so they can expand the image they have of themselves. Open up to possibilities and sensations.” The ability to open up can allow the actors to play a larger variety of roles.

Luckily, the theater department has selected a play where the students can test their abilities. The current production has a unique twist: the lead roles will be played by puppets! The play is called Avenue Q, and can only be described as a rated R Sesame Street. I snuck into a dark theater on a Monday night to catch a glimpse of a rehearsal.

Six laptops belonging to the stage director Christine LaBoy and her five assistant stage directors sat on the edge of the stage. The stage is bright, and a variety of colorful puppets sat on the hands of five students as they wove in and out of large wooden frames. “Take it from the top!” shouted Deborah Crumbie, the assistant director of the show. Katya Stanislavskaya, the musical director, began playing on the keyboard; her fingers on the keys were the only source of music for the entirety of the rehearsal.

Troy Austin entered with an eyeless, orange puppet whose name turns out to be Princeton. Austin erupted into a solo: Princeton was trying to find his purpose in life. “Purpose lights a fire under your ass,” he sang. Five backup dancers came out of stage right, and grabbed their invisible puppets. Dancing and circling the stage, the scene was stopped abruptly to be reworked by the director and choreographer. “It needs to be tighter,” Crumbie said.

The actors seemed to use their talent effortlessly. Austin, even with a sore throat, hit every note. When a scene needed to be reworked, he was able to start singing from the middle of a song without missing a beat. “Let’s start from the top,” Stanislavskaya would say and Austin delivered the scene as perfectly as he did the first time. Moment, Austin’s understudy, was thankful for the opportunity to learn from the upperclassman. “The biggest learning experience for me was being an understudy and watching all the theater majors who have been studying,” he said. “They’re made of people who have stakes of when they leave this place, New Paltz, this college. They’re going into a world where what they can bring to an audition, what they can bring to a show, is what they’re going to pay their rent with. Definitely a hotter flame under your ass.”

Austin is a junior at SUNY New Paltz, the male lead in the Avenue Q production and a student from Connie Rotunda’s movement work class. “Movement, it ties into the show, it ties into acting in general because acting is kind of a simulation of real life and if you don’t have fluent and organic movement then it’s gonna fall flat,” he said. “It’s not going to simulate real life. In that class we learn a lot about how to follow your instincts and how to act on an impulse.”

Incorporating a puppet into the mix is a whole other story. Moment mimics Austin’s hand movements as I sat next to him at the rehearsal. “The puppets are actually really hard to operate,” Moment explains. “Especially the metal rods that dictate the hand movements of the puppets.” The puppets that resemble Muppets and Sesame Street characters are handmade by the Costume Shop at SUNY New Paltz, which explains the unfinished ones, like Princeton who has no eyes.

“Every movement with your head has to be the same thing, every shake of your head,” Austin says of working with the puppets. “If they end on an ‘m’, you have to end with the mouth open because a human says ‘mom’ and your mouth ends open. It’s also kind of like patting your head and rubbing your stomach at the same time. When you’re singing you have blocking, you have choreography, you have your lighting cues, and on top of that, while you’re running around, you have to also walk with the puppet. Which is bouncing your hand up and down, otherwise it doesn’t look like they have any fluidity to them.”

“How do you keep all of that straight in your head?” I interjected.

“You don’t, you go crazy,” Austin laughed. “You really don’t, but once you lock it into place it’s kind of free range and it’s fine after that.”

Keeping track of the technicals is difficult, but the challenges of the stage don’t stop there for the actors. They also have a duty to portray intense, emotional moments on stage.

“What a play is, it’s showing the most important moments of someone’s life, those aren’t normal,” said Moment. “You have to find a way to bring truth to something and still rise in energy and vocal quality and movement to match these momentous things that are happening in people’s lives. The way that [my classes] help me do that is in acting what we do is an all encompassing thing, it’s voice, movement, everything. What I’ve learned there the most is adapting to the truth of whatever your character is.”

When the rehearsal halted for a required break, the students quickly dispersed. The department runs on an equity schedule for the six rehearsals a week, which is what professional actors use. It means there is supposed to be a five minute break every 55 minutes or a ten minute break after 80 minutes. “A big thing that I’ve learned is, aside from my art, are the conditions of the professional world and how the professional world operates,” said Moment. “The schedule, the rehearsal etiquette, stuff like that is very very very important to know and I’m glad that I had this year to acclimate.”

Rustling of snack bags and scripts echoed in the theater. An actor from a couple of scenes earlier disappeared for a few minutes and reemerged with a mug of tea. I forgot how important throat health is for the actors: their voice is their tool. An understudy leapt up to meet with his partner and I wonder if they bounce ideas off each other about how to portray their character. A Bert and Ernie counterpart cradles his puppet. All eagerly anticipate what is coming in a couple of weeks: opening night.

“Theater is so visceral and so real. One of the reasons why it’s so appealing is in this day and age where we have screens and all this, theater is one of the last places where you can go and see real humans with no barrier in between,” said Moment, his wisdom surpassing his age. He sits back in his chair, his small frame a juxtaposition with his large personality. “I think that’s one of the reasons why theater is so so indispensable as an art. It’s why I’m going into it for sure. Film, it’s awesome. It takes moments and immortalizes them forever. But theater, one of the beauties of it is that it’s so temporary. That doesn’t make it any less important to commit to that and to bring these extraordinary moments of somebody’s life to light every night.”

Meg Tohill examines the library and late night study room till 4 a.m., observing and conversing with other students finding a haven in the library.

Trish Mollo stays committed to a 6 a.m. start at the gym to delve into the minds of the gym rats that seem to live there.

Alicia McGowan observes the rugby team and how they handle practices, games, losses and life.

Emily King is a farm girl at heart, but keeps that a secret as she accompanies the Sustainable Agriculture Club on campus and discovers what they think of the future of farming.

Bryan Godwin watches band MoonUnitt who is new to New Paltz perform and light up the house show scene.

Max Freebern is confused about this wave of music new to him called Noise music, but he sits back and lets it surround him.

Sabrina Petroski joined the SUNY New Paltz burlesque troupe for their 10-year anniversary show where she learned more than just the art of burlesque.

When Animals, Toys and Magical Beings Come to Life Through Jo-Ellen Trilling’s Art